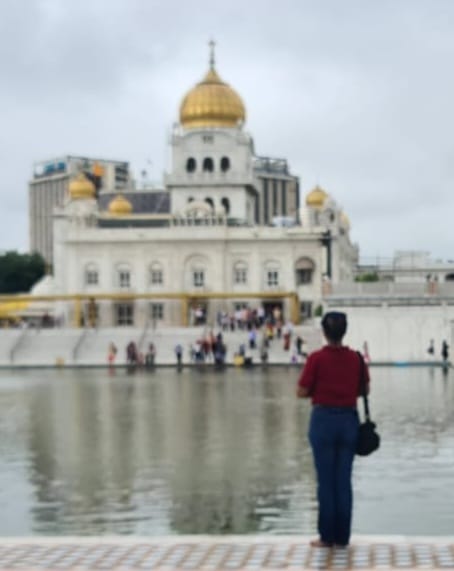 Gurdwara Bangla Sahib is a Sikh temple and a popular tourist destination in Delhi. A visit … Gurdwara Sri Bangla Sahib is located near Connaught place at New Delhi. Gurudwara is instantly recognizable by its white marble with stunning golden dome and tall flagpole called the Nishan Sahib. It feels like a gateway to divinity in the heart of the city, Bangla Sahib is an epitome of Sikh faith and spirituality.

Over a thousand people visit this serene place in one day.  Be it men, women, young, old or middle-aged, people across the spectrum come here with families to visit. Gurdwara is an example of the generous nature of the Sikhs.  Everyone do sewa voluntary from mopping the floors to shoe-keeping, Aura is filled with whiffs of cow butter oil.  You see devotees with a generous handful of kadha prasad on your way.  The sound of the chanting of Shabad Gurbani in the Indian classical music supports your concessions mind to associates with unknown divine that’s a magic.  It is important to cover your head when entering the Gurudwara Bangla shaeb, Colourful scarves are available at the entrance.  Shoes called as [ Jodde] should be deposited near the entrance and received your token. Next your feet should be washed in lukewarm water before entering. There is also a ‘Yatri Navas’ or tourist guest house adjacent to the gurudwara Bangla sahib. Best Tourist Guide in Delhi

Gurudwara Bangla Sahib a huge pool is called Sarovar believed to contain healing waters. It is busy around the water as families gather, children play and teens relax in the decorative areas around the yard. Sometimes people approach the water, kneel on its shore and quickly splash their faces. Despite the crowds, it is calm and peaceful, a stark contrast to the chaos on the streets outside. Somehow the traffic noise and horn sounding goes away and you get the peace of peace.

One’s eyes will be drawn to a large, serene lake breathes of freshness. Where the water looks calm, deep and clear. There’s pool inside its complex, known as the “Sarovar”, is considered holy by Sikhs and is known as “Amrit”. A large reservoir called as Sarovar home of large and small, orange and green fishes; this body of water is said to act as a panacea. Some are taking a bath; others splashing their faces and essentially perform the parikrama [coaccumulations] to complete their holy visit. At night gurdwaras reflection in the pond looks like a shimmering pearl, which is worth seeing. There is an important story associated with Bangla Sahib, and the waters of the lake are believed to have miraculous healing properties. It is taken away in bottles as souvenirs by devotees coming to Bangla Sahib from all over the world.

Gurudwara Bangla Sahib is decorated with marble inlays and Iranian looked calligraphically styled designed on the celling. You walk inside the prayer hall, barefoot with your head covered, Devotees are bowing their heads in front of   a shinning golden palanquin kept in the middle decorated with colorful flowers. The Holy book Guru Granth Sahib is resting on it covered with glittering in special kind of fabrics. One elder priest is sitting beside the book holding a chawar in his hands. Three people are singing hymns from the holy book with the help of tabla and harmonium. Old people are facilities to sit comfortably behind on the chairs rest all sits on the carpeted floor.

Since the time of Guru Nanak, the first Guru of the Sikhs, who started this tradition in 1481, the Golden Temple in Amritsar has been serving free hot meals to people of all faiths and beliefs who comes daily to its doors.

The Guru said that by the grace of God no one goes to bed hungry. No one sleeps hungry with the blessings of the Holy Spirit. The Gurudwara has a large hall where food is provided served to all irrespective of their caste, creed, sex or religion, and that too without any compensation. One can also offer their services to the Almighty by helping in the community cooking, which is considered to be one of the most blessed prayer services in the Gurudwara Bangla Sahib. The langar services are simple but delicious lentils, sessional vegetables, chapati and rice. The food at the langar is vegetarian, and simple, wholesome and wholesome. They usually consist of roti (bread), rice, dal (lentils), a vegetable dish, and kheer (sweet).

Everyone is welcome to share the food. No one goes back. Food is usually served twice each day of the year. Each week a family or several families volunteer to provide and prepare langar. It is very generous, as there can be several hundred people to dine, langar is every day.

“If you have been to any gurudwara Bangla Sahib and had langar, you know that there is no dal tastier than “langar dal” in the whole world”.

The desi ghee [cow butter] of the gurdwara’s cuisine cooked arouses the hunger of at least 8,000 people. From dal-chawal (lentil-rice) to sabzi-roti (vegetables and chapatis) and kheer (rice pudding), offered a free langar or at a specified time. The langar hall is bustling with activity throughout the day.

Apart from the virtue of sharing, the concept of langar also teaches equality and compassion. After having darshan of the Guru, i.e. Guru Granth Sahib, in a Gurdwara, the devotees or guests of the Guru sit together in rows called pangat on the floor and serve langar. The langar timings at Gurudwara Bangla Sahib are between 8:30 AM to 04:00 PM and 06:30 PM to 10:30 PM. The langar hall of Bangla Sahib fills up every 15 minutes.

inside the museum complex one can find interesting pieces of Sikh history, from old manuscripts of Sukhmani and Japji to handwritten mantras and Chhote Granth Sahib by Guru Arjun Devji, Sikh gurus on canvas and their Colourful statement of childhood. Coins from the early centuries and legendary battlefield scenes live on the walls of this museum. Within walking distance is a library that promises to tell you the importance of the turban, and on its shelves is a large text books of Sikh religion and history.

Guru dwara Bangla Sahib was Built in 1664 to commemorate the visit of Guru Har Krishna, the eighth guru of the Sikhs. Originally this place was once the Bungalow (“haveli” or “bangla”) in the 17th century of Mirza Raja Jai Singh, hence the name “Bangla Sahib”. It’s original name was Jaising Pura Palace at that time. When the eighth Sikh Guru, Guru Har Krishan visited Delhi in the year 1664, he stayed over at the palace itself. The building was built by Sikh General, Sardar Bhagel Singh in 1783.  It was built during the holy visit of Shri Guru Harkarshan Ji to Delhi. Guru Sahib agreed to come to Delhi at the request of Mughal Emperor Aurangzeb and Mirza Raja Jai Singh of Amer. Raja Jai Singh invited Guru Sahib to the present place.  The Raj Jaising’s wife thought to test Guru Sahib’s spiritual powers and disguised as a maid sat in the audience. Guru Sahib recognized the queen at the age of 8 and sat on her lap. Making him aware of the spiritual powers of Shri Guru Nanak Dev Ji and his true disciples.

An unexpected turn of events led to an outbreak of cholera and smallpox in the area, which claimed many lives. The Smallpox was widespread in Delhi at that time. The citizens of Delhi have suffered grief and death as a result of the calamity that befell them. With love and compassion for the suffering of humanity, Guru Sahib blessed his sacred powers in the water and poured the Amrit into a small pond. All those who drank the water from the pond were cured of all illnesses. Thus, the people of Delhi were saved from the plague. Devotees from everywhere come with devotion and have a dip bathing in holy water get rid of, which relieves from suffering. and soak against acne and other skin conditions, instead of staying in the safety of Jai Singh’s house, the Guru spent most of his time serving the poor, sick and needy. He distributed medicine, food and clothes to the needy. He also ordered Diwan Dargah Mal to spend all the daily prasad given to the Guru by the people on the poor. Guru has gained more fans. Soon, stories about his powers of healing spreads throughout the city. Suffering from smallpox himself, the young master, who was just over five years old, died on 6 October 1661. He was tried and tested as a perfect soul without any fear and was fully enlightened.

Gurudwara Bangla Sahib is located in Connaught Place which is also called the heart of Delhi. It is easily accessible via the Blue Line and the Yellow Line Metro. If you are traveling on the Blue Line Metro, get off at Rajiv Chowk. Also, take an auto rickshaw to reach the Gurudwara which is 2 km from the station. Patel Chowk Metro Station is the nearest metro station on the Yellow Line. The Gurdwara Bangla Sahib is located at a distance of 2 km from Bangla Sahib. This attraction also has a dedicated bus stop, so you can get off there and cover a distance of about 1 km to reach your destination. Alternatively, you can hire a taxi to reach Gurudwara Bangla Sahib.

Sikhism, religion and philosophy originated in the Punjab region of the Indian subcontinent in the late 15th century. Its members are called Sikhs. Sikhs refer to their faith as Gurmat (Punjabi: “The Way of the Guru”). According to Sikh tradition, Sikhism was founded by Guru Nanak (1469–1539) and led by nine other gurus. Sikhs believe that the same soul resided in all 10 human gurus. , after the death of shri Guru Gobind Singh (1666–1708), the soul of the eternal Guru transferred himself to the holy book, the Guru Granth Sahib (“Book of the Guru”), known as the Adi Granth. Also known. (“The First Volume”), after which he was considered the sole master.

The following discussion of the lives of the 10 Gurus rests on the traditional Sikh account, most elements of which are derived from hagiographic legend and tradition and cannot be verified historically. This point should be fully taken into account, especially among beginner gurus.

Sikh means “learner” in Punjabi, and those who joined the Sikh community, or panth (“path”), were those who sought spiritual guidance. Sikhs claim that their tradition has always been separate from Hindu religion. Nevertheless, many Western scholars argue that Sikhism in its early days was a movement within the Hindu tradition. They suggest that Nanak was a Hindu and ultimately belonged to the ascetic tradition of northern India, a movement associated with the great poet and mystic Kabir (1440–1518). The saints, most of whom were poor, homeless and illiterate, composed hymns of great beauty expressing their experience of the divinity they saw in all things. Their tradition was strongly influenced by Vishnu bhakti (the bhakti movement within the Hindu tradition that worships the god Vishnu), although there were significant differences between the two. Like the followers of Bhakti, the sages believed that devotion to God is necessary to escape the cycle of rebirth in which all human beings are trapped. However, unlike the followers of Bhakti, the sages maintained that God is nirgan (“without form”) and not sagan (“with form”). For sages, God can neither be embodied nor presented in a concrete form.

“The world is full of magic things, patiently waiting for our senses to grow sharper.” – W.B. Yeats.

Sabz Burj in a New Look